Evans and Seyffert powered away from defending champion Andrew Hill and teammate Chris Wolhuter on the Zuurberg Pass to open up more than a minute’s lead in the 200km mountain bike race.

The Biogen Volcan-Altech Autopage duo sailed into the finish at Zuurberg Mountain Village to claim the 66km stage in a time of 2:40:27, followed by TIB Insurance’s Hill and Wolhuter in 2:41:46.

According to Evans, things had not gone according to plan as they had originally decided to make an easy start to the racing. 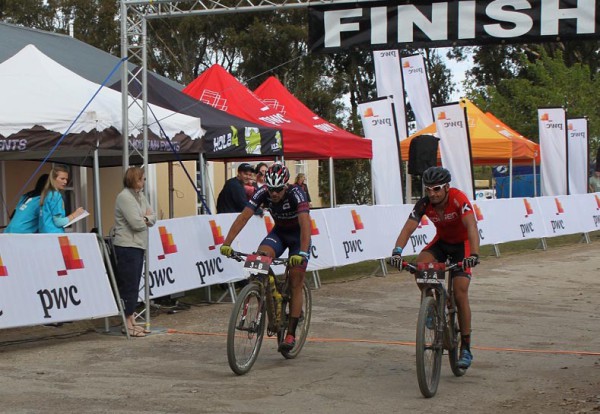 “We both felt good early on, so then we pushed it and had a nice gap by the middle of the stage.”

After the opening gravel stretch, the top two teams got away together on the Seven Dwarves descent into the horse trails section of the Addo Elephant National Park.

Then Evans and Seyffert put in a major effort on the first big ascent of the day, Monty’s Climb, up to waterpoint one at 18km.

They extended the gap into the undulating Sundays River Valley section and were one minute and 20 seconds clear of Hill and Wolhuter by the second waterpoint after 35km.

The chasing team made up time rolling through the thick African bushveld inside Intsomi Game Reserve and were thirty seconds off when they exited.

By the third waterpoint at Hayterdale Trails at the bottom of the pass, Hill and Wolhuter were just 15 seconds behind.

But Evans and Seyffert put more than a minute into them on the climb to take a comfortable stage win.

“We need to save some legs for the last two stages because judging by today’s so-called easy day it’s going to be quite hard,” added Evans.

Seven-time national road champion Anriette Schoeman and Africa Silks teammate John Wakefield rode away from their mixed category rivals on the first climb to dominate the stage in 3:14:27.

Last year’s winners Lester Tait and Siska van der Bijl of Red Cherry were a distant second in 3:39:51, with Gerhard and Junita Kruger third for PwC in 3:45:17.

The Merrell Ladies pairing of SanMari Woithe and Andrea Shirley are clearly on the hunt for a second consecutive victory in the women’s race after taking the stage win in 3:34:46.