Applying his positive life values to his approach on the course has paved the way for Madibaz golfer JP van der Watt to make his mark on the game.

The Nelson Mandela University student-athlete mastered unfamiliar conditions to be crowned Humewood Golf Club champion at his first attempt in March, having played the links layout on only a few occasions.

“I strive to be positive and happy and therefore try to see the good in all situations. So why should it be different when I’m playing golf?” said Van der Watt.

“I also think my ball striking and the way I conduct myself on the course have helped me to reach the level I have.” 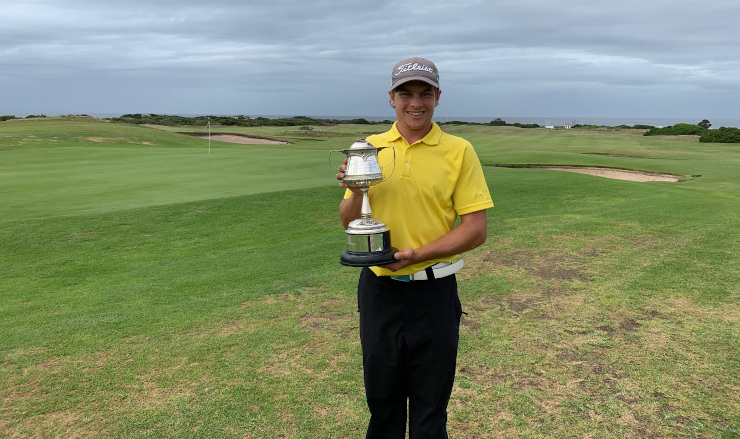 He acknowledged, though, that there was always room for improvement and identified his short game as a vital area.

“Working on that is the most important thing for me to be able to take that next step,” said the first-year B.Com student.

“If I can shave off one or two shots each round it will catapult me to achieving better things sooner.”

Although Van der Watt grew up in George, matriculating from Glenwood House, he resides in Port Elizabeth while attending the varsity.

He picked up his first club at the age of 10 and an early memory was of him playing at the George Golf Club for the first time with his father and two women.

“I just remember that they were wonderful ladies who helped me to understand the etiquette of golf and shared their stories,” he said.

Claiming the Humewood title “with the history and tradition behind it” was one of his career highlights, admitted the 19-year-old, who boasts best scores of 62 and 64 respectively in social and competitive rounds.

The other was winning the Southern Cape junior match play title last year.

He acknowledges a range of people who had an influence on his fledgling career.

“My dad has to be the main one for everything he has done and the sacrifices our family has made for my golf.

“[Coach] Val Holland, back in George, really helped me to develop as a player, while [training PGA professional] Pieter Rademeyer from Humewood and Mr Karl du Preez from Madibaz Golf Club have given me a lot of support.”

Religion is a cornerstone of his life and he thanked the CRC PE church for their support, love and guidance.

“A verse that I live by is Philippians 4:13: ‘I can do all things through him who gives me strength’.”