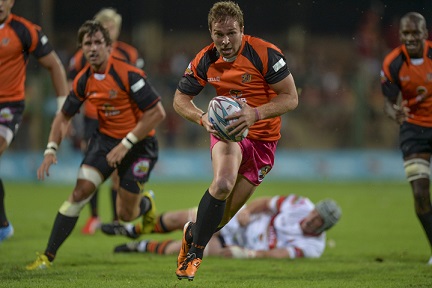 The University of Johannesburg’s top rugby players have started their pre-season training ahead of the 2015 FNB Varsity Cup, presented by Steinhoff International. Photo: Saspa

The University of Johannesburg is getting ready for next year’s FNB Varsity Cup, presented by Steinhoff International, with their top rugby players having started their pre-season conditioning and on-field training programme.

According to www.varsitypost.com, UJ will be looking to work their way up the rankings after giving Varsity Shield runners-up the University of KwaZulu-Natal a 42-8 drubbing in their crucial promotion-relegation game earlier this year.

Despite the encouraging end to their 2014 campaign, UJ head coach Werner Janse van Rensburg said that result would have no bearing on the new season.

“Unfortunately there’s no carryover from this game to the next competition and although our last reference is a good one, it will have little or no effect on the new campaign.”

Janse van Rensburg said two training squads were currently hard at work, with the goal being to concentrate more attention on the players and develop new talent.

He said at least twenty promising Johannesburg-based first-year students would be joining their Young Guns squad after their matric exams.

“The idea behind this second group is to develop players for the 2016 Varsity Cup, which forms part of our long-term planning.

“We will be training until the second week in December, followed by our pre-season friendlies and a training camp in January after the short break.”

Janse van Rensburg said UJ’s “Old Bulls” would play a critical role in guiding the squad to success, especially those who had gained experience in previous campaigns.

“The Old Bulls concept is something we started this pre-season, where our leadership group will play a bigger and more important role in guiding the group and also stepping up in their own roles.”

He said these stalwarts were a blend of players who had been involved with the university for a while and those who understood the training culture.

“Although some of them have represented the provincial union or other unions it is not necessarily the sole reason why they are part of the grouping.”

Janse van Rensburg said UJ had adapted well to the challenges posed by players moving on to provincial level and the strict academic criteria and other rules imposed by Varsity Cup.

He said his side had lost the services of forwards Shane Kirkwood and Henna Bredenkamp, as well as back Jacques Pretorius, due to the competition’s age limit of 25 years.

“Players like Jaco van der Walt and Harold Vorster have moved on to the Golden Lions but we’ve been developing some of our younger local talent in all our competitions throughout the year.”

Looking ahead to 2015, Janse van Rensburg said the Varsity Cup was always of an enormously high standard and that the games would be close, even in the final rounds.